Jeff Bue, a 16-year-old resident of Fairbanks, Alaska has been selected as the winner of the 2008 National Rifle Association Outstanding Achievement Youth Award. Bue is to receive a plaque marking this accomplishment along with a $5,000 dollar check during the NRA Board meetings in September. 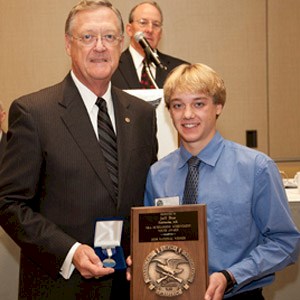 Jeff Bue is a NRA life member and his involvement with shooting sports and volunteer activities have greatly exceeded the core requirements for the award. Bue is an active member of a variety of clubs within his region including: the Fairbanks Biathlon Club, the Fairbanks Trap Club, Tanana Valley Rifle and Pistol Club and the Midnight Sun Sharpshooters 4-H Club. Jeff is highly active with his 4-H club serving as its president for six years and currently as its treasurer. This has also led to him winning the Tanana District 4-H Member of the Year three years in a row. Bue is also an active hunter taking hunter education courses in Alaska, and even harvesting his first caribou at the age of nine.

As a shooter, Jeff primarily participates in YHEC and biathlon events and has achieved honors in both throughout his junior career. Jeff has won the Alaska YHEC competition for the last three years and in 2007 participated in the international YHEC competition in New Mexico. He is an active participant in the Winchester/NRA Marksmanship Qualification Program having earned a Distinguished Expert rating in both light rifle and sport shooting qualifications. Jeff has a passion for biathlons, winning multiple medals within his class and attending trainings held by the United States Olympic Biathlon team's coach.

Within his community Jeff is actively working toward firearms safety by helping teach hunter education courses, and as an advocate of general range safety. When a fire destroyed his home range, Jeff worked to salvage and repair many of the firearms stored there. This dedication to preserve shooting in his region exemplifies his dedication to the sport. All this is joined with a strong focus on academics that has earned him a 3.95 to this point in school.