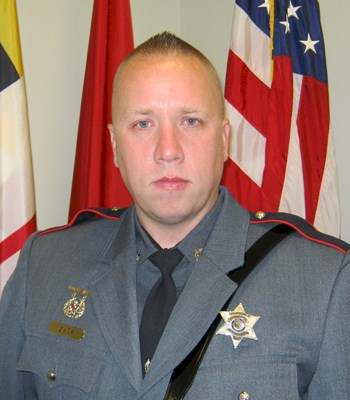 On January 6, 2011 a Cecil County Maryland Sheriff’s Office Deputy attempted to stop a motorist for a minor traffic offense with the violator ignoring the deputy’s signals to stop and a 10 mile long pursuit began. At one point during the pursuit the violator stopped, placed his vehicle in reverse and rammed the pursuing deputy’s cruiser. Identified through a license plate check, the driver was found to have a suspended driver’s license and there were reports that he had been aggressive against law enforcement, local government officials, and may be unstable.

Unaware what was taking place, off duty Cecil County Deputy First Class Michael Zack who had gotten off of the midnight shift several hours earlier decided to go to the gym and work out because he could not sleep. Taking his assigned take-home cruiser he was unaware of the pending pursuit until he saw his fellow deputy at a distance in his rear view mirror. He then heard radio traffic about the traffic stop and that the driver may attempt to flee.

Despite other deputies being dispatched to provide back up, having only his off duty pistol and credentials, and wearing only shorts and a t-shirt, Deputy Zack turned his cruiser around to assist his fellow deputy without hesitation. As Deputy Zack finished a u-turn the pursuit began and as the suspect speed towards him the suspect moved his car directly into the path of Deputy Zack’s cruiser in an attempt to hit him head on. After taking evasive action Deputy Zack was able to turn back around and join in the pursuit and provide immediate back up and took charge of the communications.

The pursuits path indicated that the suspect was heading for his residence so Deputy Zack terminated the pursuit to protect innocent citizens from further danger and hoping that the suspect would slow and stop driving recklessly when he saw the cruisers back off.

From the beginning to the end of the incident Deputy Zack played a major role. His response without hesitation to aid a fellow deputy despite being off duty without his ballistic vest and duty gear was without a doubt above and beyond the call of duty. Deputy Zack’s valorous act of placing himself in harm’s way to draw the attention of the gunman away from his partner is a credit to himself, his department, and the community he serves. His personal actions to quickly end the gunman’s actions ensured the safety of other responding deputies and neighborhood residents and his calmness, professionalism and heroism are in keeping with the highest traditions of law enforcement. It is with great honor and pride that that National Rifle Association names Deputy First Class Michael S. Zack of the Cecil County Maryland Sheriff’s Office as the 2011 NRA Law Enforcement Officer of the Year.