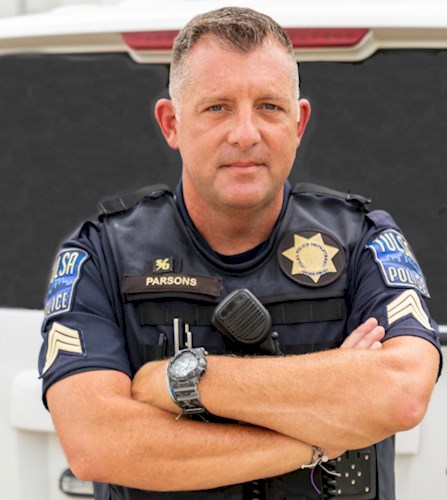 On July 3, 2018, at about 1:23 PM, officers of the Gang Unit of the Tulsa, Oklahoma, Police Department initiated a traffic stop for an improper license plate display on a van. The traffic stop took place at a local convenience store with the suspect vehicle parked in the gas pump area. When the officers approached the vehicle they noticed that the driver had moved to the second row of seats in the van he had been driving. The driver was uncooperative with the officers, refusing to provide identification or to follow commands to exit the vehicle. Gang Unit officers negotiated unsuccessfully for several minutes with the suspect before they requested additional officers, as well as an officer with less-lethal munition capabilities.

Shortly after Sergeant Michael Parsons arrived at the scene, the suspect was advised he was under arrest for obstruction and the improper tag display on the vehicle.

As Sgt. Parsons began to deliver the Pepperballs, the suspect drew a weapon and fired multiple rounds at Sgt. Parsons and the other officers at the scene.

Once behind cover, Sgt. Parsons re-assessed his wounds with the assistance of a police medic. He then began forming an arrest team to apprehend the suspect as he was still a threat to anyone in the area. Sgt. Parsons exercised outstanding judgment and determination in leading the arrest team to take the suspect into custody. Only after the suspect was in custody and no longer a threat to the public did Sgt. Parsons allow himself to be medically treated at the scene and transported to the hospital.

Despite being wounded, Sgt. Parsons continued to show leadership by remaining in-command of the incident and ensured the safety of the other officers and citizens on the scene. He demonstrated sound judgment and good tactics throughout the incident. He had the presence of mind to quickly establish specific roles for different officers, and then lead the arrest team until the suspect was in custody and the scene was rendered safe. As such, it is with great honor and pride the National Rifle Association names Sergeant Michael Parsons as the 2018 NRA Law Enforcement Officer of the Year.

“I am privileged to join the millions of members of the National Rifle Association in honoring Sergeant Parsons as the NRA’s 2018 Law Enforcement Officer of the Year,” said NRA President Lt. Col. Oliver North. “Sergeant Parsons’ outstanding tactical decisions in the heat of battle, his leadership and bravery in response to a serious threat to his fellow officers and innocent lives are a testament to his valor. Indeed, his heroic actions, in spite of being wounded, epitomize the selfless dedication of our men and women of law enforcement to public safety and to the communities they serve.”