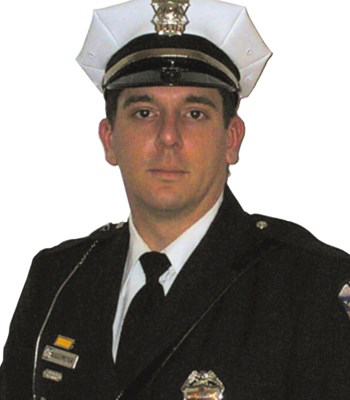 The National Rifle Association is proud to announce that Officer James D. Niggemeyer of the Columbus, Ohio Division of Police has been chosen as the 2005 NRA Law Enforcement Officer of the Year.

Officer Niggemeyer was one of several officers who responded to a violent, chaotic situation on the night of December 8, 2004. A little after 10:00 p.m., 911 operators began receiving multiple panic-stricken calls from a local nightclub. During a concert, a man had rushed the stage and fired shots at the band. In moments, seven people were wounded, four fatally.

Officer Niggemeyer, patrolling just blocks away, was the first officer to arrive on the scene, less than three minutes after the first 911 call was received. Niggemeyer entered the building through the rear; five more officers arrived momentarily and entered through side doors. Dead and wounded citizens lay on the floor, shots were still being fired, and several hundred people were trying to escape.

Despite the chaos, Officer Niggemeyer was able to spot the gunman quickly, near the rear of the stage. Retreating from the other officers, the suspect had grabbed a hostage, immobilized him in a headlock, and was holding a gun against the man's temple. Positioning himself about 20 feet from the suspect, Niggemeyer, armed with a 12 gauge Remington 870, was able to get off one well-placed shot, killing the gunman instantly and ending the carnage. The gunman still had 35 rounds of ammunition when Niggemeyer shot him.

Commenting on Officer Niggemeyer, NRA 1st Vice President John C. Sigler, a retired police captain and now an attorney practicing in Maryland and Delaware, said, "It isn't every day that an officer is faced with a decision like this. NRA's Officer of the Year made the right decision under the most adverse conditions and relied on his training and experience to save the life of an innocent civilian victim. No one can doubt his dedication to duty or his willingness to take responsibility for his actions. In today's society, law enforcement officers of this caliber must be recognized and commended. NRA commends this officer for a tough job well done."

Adding to his accolades was Niggemeyer's immediate supervisor, Columbus P.D. Sergeant Jeff Leesburg, who said, "There is no greater example of police service than placing oneself between the threat and the innocent."