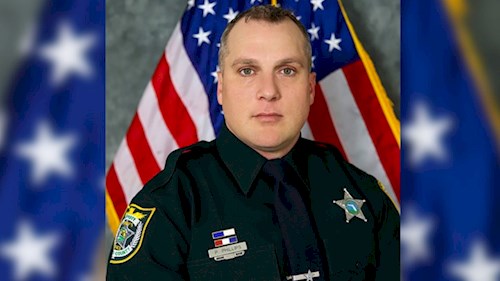 One neighbor was extremely agitated about the other feeding nearby feral cats. The irate neighbor began screaming at Deputy Phillips after he arrived on scene. The officer tried to de-escalate the situation by having the other neighbor go into his home, and then he approached the agitated neighbor. The man began behaving erratically, however, so Phillips called for backup. While Phillips was thus engaged, the irate neighbor went behind a vehicle. As the officer approached again, he heard a rifle being charged, and then shots were fired at him. He returned fire as he retreated to cover. Despite his wounds, he reloaded and returned fire again from behind cover until the shooter stopped firing.

During the exchange, Deputy Phillips was shot three times—once in his right shoulder and once in each leg. Despite his wounds, he reloaded and returned fire again from behind cover until the shooter stopped firing.

Other law-enforcement officers arrived, performed first aid on Phillips, and secured the scene. The suspect received several gunshot wounds and succumbed to his injuries despite repeated attempts to revive him. He was found to have a record, which included prior attempts to resist arrest and battery of an officer.

Deputy Phillips was nominated for the Law Enforcement Officer of the Year award by Brevard County sheriff, Wayne Ivey, who said: “When Deputy Phillips was faced with imminent personal danger, he distinguished himself bravely, and resolved a situation which could have put many other people in grave danger.”

“I am honored to be recognized for this award among so many deserving fellow officers. It’s a privilege and a blessing to serve my community,” said Phillips.

Deputy Phillips is a U.S. Army veteran, having served for 13 and a half years before joining the Brevard County Sheriff’s Office in 2018. He has undergone several surgeries for the gunshot wounds, but a full recovery is expected.

For his willingness to protect others and his valor in the face of extreme danger, the NRA bestowed Deputy Paul Phillips with Law Enforcement Officer of the Year award for 2019.