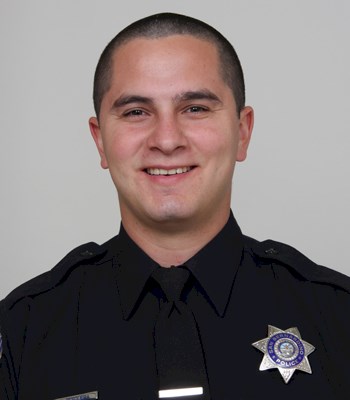 The National Rifle Association honors Officer Marcus Pesquera as the NRA Law Enforcement Officer of the Year for showing valor and heroism in his quick, life-saving action during a gunfight that severely wounded his field training officer, Gabriel Garcia, in August 2014.

Around 2 a.m. on August 22, Field Training Officer Gabriel Garcia of the San Bernardino California Police Department and his trainee, Officer Marcus Pesquera, were on patrol together, checking some high-crime areas. At the time, Field Training Officer Garcia was a six-year veteran of the department, and Officer Pesquera had only recently graduated from the police academy and been in training for seven weeks.

Turning down a remote unpaved road, the officers came upon a group of people standing around a vehicle with its hood up and its doors open. Due to a recent spate of stolen vehicles and other serious crimes in the area, the officers exited their vehicle and approached the subjects on foot.

One of the subjects they were about to encounter was a documented gang member with a lengthy and violent criminal past that should have kept him off the streets. The officers had no way of knowing of his violent past, or that he was wanted.

The subjects were standing apart, so the officers moved away from each other by several feet to maintain a tactical advantage, with each officer maintaining visual contact of different subjects. Officer Pesquera then heard Officer Garcia say words to the effect of "come over here" and "let me see your hands," which was answered by immediate gunfire.

Officer Pesquera did not know that Officer Garcia had been gravely wounded by the gunman's fire. Despite his limited patrol experience, Officer Pesquera reverted to his training, drew his handgun as rounds were being fired at him while dropping to the ground to get to cover, and began returning fire as dozens of rounds were exchanged.

During a slight lull, Officer Pesquera yelled to check on his partner. After getting no response, he left his position of cover to try to find him. Officer Pesquera found his partner shot in the head, not moving, and unresponsive. He then radioed the communications center that his partner was down and needed immediate medical assistance and that he was engaged in a gunfight.

Seconds later, another volley of 20 to 30 rounds was exchanged between Officer Pesquera and the gunman. The gunfight lasted for over a full minute before Officer Pesquera's rounds neutralized the shooter, ending the deadly assault and further danger to Officer Garcia, bystanders, responding officers, and medical rescue members.

Officer Pesquera's courage under fire and heroic actions allowed immediate response by medical personnel to reach Officer Garcia and begin life-saving measures. Officer Garcia was rushed to a local hospital, where he received emergency medical treatment for serious head and chest injuries. He was placed into a medically induced coma in an effort to save his life. Since then, thanks to the actions of Officer Pesquera, Officer Garcia continues to fight towards full recovery.

Officer Pesquera's heroic actions under the most stressful and dangerous circumstances are a credit to himself, his department, and the community he serves. They are in keeping with the highest traditions of law enforcement. The National Rifle Association recognizes Officer Marcus Pesquera of the San Bernardino California Police Department for his valorous actions by naming him the 2015 NRA Law Enforcement Officer of the Year.

"The more than 5 million members of the National Rifle Association would like to honor Officer Pesquera's courage, bravery, and quick thinking as the NRA Officer of the Year," said NRA President Allan D. Cors. "His heroic actions ended a deadly assault and allowed first responders to safely and quickly reach Officer Garcia to perform vital life-saving measures."