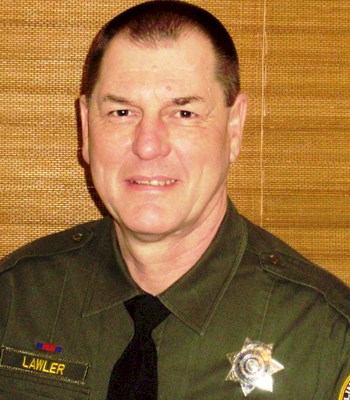 On February 16, 2008, Sergeant Dave Lawler of the Linn County Oregon Sheriff's Office had just finished assisting another officer on an accident investigation when he was assigned to handle a complaint of a man screaming in the middle of the street armed with a shotgun. While responding an update placed the suspect entering a vehicle.

While additional information came in, it conflicted with the original information and the suspect was found to have moved to a gas station several blocks away where he discharged his shotgun several times. As Sergeant Lawler approached the gas station he identified the suspect and saw that he was wrestling with a young woman near a car parked by the pump island.

Sergeant Lawler moved his cruiser into a tactical position to block traffic and protect innocent persons while at the same time maintaining observation of the suspect and acquiring cover. Sergeant Lawler then saw the suspect, with shotgun in hand, dragging the young girl towards the front of the gas station convenience store while yelling and screaming unintelligibly.

From his position of cover, Sergeant Lawler challenged the suspect to drop the shotgun and comply with his orders. The suspect clearly had no intentions of complying and Sergeant Lawler's efforts at negotiations fell on a deaf ear, with the suspect continuing to ramble on with no meaning to his statements.

Seeing that the suspect was preoccupied in delivering his ramblings and demands, including calling for the media, a helicopter, the FBI, and other various governmental entities, Sergeant Lawler decided he had an opportunity to move back to the driver's door of his cruiser so he could get his AR-15 Patrol Rifle.

Evaluating his surroundings, Sergeant Lawler realized that the front doors and windows of the convenience store were directly behind the suspect. Should he be forced to fire he needed to ensure his accuracy was maximized, so he sacrificed some of his cover and took a low position between the open door and the body of his cruiser so he could support the rifle on the door frame and hood.

The suspect continued to pull and fight with the young woman while pointing the shotgun at her head. Without a clear shot and not knowing if the suspect would reflexively pull the trigger of the shotgun, Sergeant Lawler could do nothing but try to calm the suspect down and wait for an opportunity to save the hostage.

As Sergeant Lawler scanned over the hood of the suspect's car, he saw the suspect on the pavement and then the shotgun being brought up to target him again. After firing three quick shots, the ordeal was over.

The valorous acts of Sergeant Lawler are a credit to himself, his office, and the community he serves. His personal actions under fire ensured that the hostage and her children survived, and no innocent persons were harmed. His calmness, professionalism and heroism are in keeping with the highest traditions of law enforcement. It is with great honor and pride that that National Rifle Association names Sergeant Dave Lawler as the 2009 NRA Law Enforcement Officer of the Year.