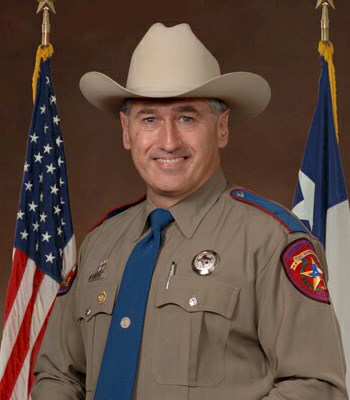 The National Rifle Association has announced the selection of Trooper John Richard "Rick" Smith as its 2006 Law Enforcement Officer of the Year. Trooper Smith was selected for this distinguished award based upon his acts of valor on August 20, 2006, in Midlothian, Texas.

On that day, Trooper Smith and other members of his shift monitored a police radio transmission of "Shots Fired -- Officers Down" from the Midlothian Police Department. Smith and four other Texas state troopers immediately responded to the call and quickly arrived on the scene. Smith was first to reach the incident, and found that three Midlothian police officers had been shot by a gunman when they attempted to investigate a complaint of a bullet breaking a nearby window. When the Texas troopers arrived, the gunman was barricaded in his apartment. Two of the wounded officers were pinned down and were unable to move to safety.

Smith and his fellow troopers provided cover, which allowed paramedics to remove one of the wounded officers from the scene. The other officer was trapped in an exposed position and was immobilized from five gunshot wounds. Trooper Smith left his place of cover and ran into the open area to assist the wounded officer. Exposing himself to the gunman's fire, Trooper Smith was soon joined by two other troopers and managed to pull the injured officer to safety.

Just moments later, however, while attempting to deploy into a more advantageous location, Trooper Smith again exposed himself to fire and was shot in the face by the barricaded gunman. The 9mm bullet entered Smith's face just under his right eye, shattered his jaw, and entered his neck. Smith, temporarily paralyzed, was dragged to safety by his fellow troopers. The eight-hour standoff finally ended when the gunman took his own life.

Commenting on Trooper Smith's actions, John Sigler, NRA 1st Vice President and a retired Police Captain, said, "There is no greater measure of an officer's devotion to duty than to risk his life in defense of the life of another officer. Trooper Smith's actions on that day in Midlothian, Texas, were, without a doubt, above and beyond the call of duty. Trooper Smith's selfless act of heroism stands as a shining example of what being a policeman is all about - doing what needs to be done to protect and defend the lives of others. The people of the State of Texas should be very proud of Trooper Smith and what he did that day in Midlothian."

When informed of his selection as NRA Law Enforcement Officer of the Year, Trooper Smith said, "Being chosen for this prestigious award is truly an honor. It's a humbling experience for me, and I am very grateful."

Trooper Smith has to his credit nearly 30 years of law enforcement service. He is a graduate of the FBI National Academy, and prior to his current service as a trooper in the Texas Department of Public Safety, Smith served for 20 years with the Dover (Delaware) Police Department, and was the department's chief of police from 1992 until his retirement from the department in 1997. He and his wife Roberta (a lieutenant colonel in the U.S. Air Force) subsequently moved to Texas, and Smith became a Texas state trooper in 2001.