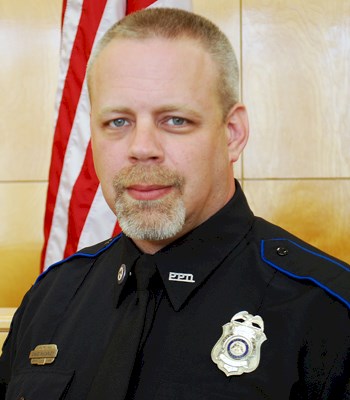 On May 1st, 2012, a group of Pearl Mississippi Police Department detectives arrived at an apartment in order to serve search and arrest warrants for a suspect wanted for sexual battery and child molestation. After no answer to knocks at the door, they announced themselves, entered, and began a slow and methodical search for persons inside. As they reached the master bedroom, they found the suspect hiding in the shower area separated by a wall from the main bathroom. After the suspect repeatedly ignored commands to come out and give up peacefully, Detective Mike Walter decided to attempt to use his less-lethal TASER to safely apprehend the suspect. As he leaned into the bathroom to discharge the TASER, the suspect darted out from behind the wall and began firing a handgun. The gunman's first two shots struck Detective Walter in the face and neck and he fell to the floor. The gunman then turned and fired on another officer, Detective David McCarley, with the first round striking him in the right hand as he was bringing his handgun sights to bear on the gunman. The round almost severed his middle finger and destroyed his duty handgun. The next round entered his leg just above the ankle and went completely through his leg. Despite being shot twice and bleeding profusely, Detective McCarley managed to move to the corner of the bedroom and pull a chest of drawers in front of him to use as cover. At the same time, other detectives returned fire while withdrawing to cover outside the bedroom.

The apartment was now a hellish scene with bullet holes in the walls, a thick curtain of gunsmoke hung in the air and because of the noise from the volume of gunfire in the small enclosed area almost everyone was temporarily deaf. Despite being shot, the gunman forced the bedroom door closed and barricaded himself inside with the two gunshot detectives.

After a few minutes, the wounded gunman, now sitting at the foot of the bed, partially regained his senses and took aim at Detective McCarley after he saw that he was still alive in the corner of the bedroom. Even though wounded and under the threat of immediate death, Detective McCarley calmly managed to begin a dialogue with the shooter and assured him that a surrender resolution was still a possibility. The gunman's attention became distracted from Detective McCarley because he was trying to look at responding officers outside the bedroom window and by the abandoned police radios blaring on the bedroom floor. Detective McCarley saw the gunman's distraction as an opportunity to begin moving inch by inch towards his fallen comrade in order to give him aid.

The shooter, realizing that Detective McCarley had almost made it across the room, began screaming at him and threatened to kill him. Detective McCarley managed to convince the suspect that he only wanted to check on his wounded friend. Fortunately, the gunman was distracted again by officers outside the apartment and the scream of sirens from responding emergency vehicles, so Detective McCarley decided to risk his own safety and, once again, began to move toward the wounded detective. When he reached him, there were no vital signs and Detective McCarley knew his friend's only chance to survive depended on his ability to receive immediate medical attention. He also found that Detective Walter's handgun was still in his holster.

As time passed, the gunman became more distracted and outraged by the responding officers outside the apartment and the detectives just outside the bedroom door. Taking full advantage of the gunman's distraction, Detective McCarley moved his body in an attempt to block the shooter's view and pretended to render first aid to the fallen detective while actually easing his friend's handgun from the holster using his severely injured gun hand. Although he managed to successfully draw the handgun, he knew it would be impossible to grip and fire the gun with his normal shooting hand since it had been shot and would have to use his support hand instead. Despite the fact that the shooter continued to glance at him every few seconds, Detective McCarley was able to slowly move the pistol onto his partner's chest and rotate it enough in order to get the handgun into his support hand.

Detective McCarley then called out to the detectives outside the bedroom, who rushed in, secured the scene, and rendered immediate medical assistance. Although CPR started Detective Walter's heart again, he tragically passed away shortly after being airlifted to the trauma center. Detective McCarley has since returned to duty, but continues to undergo reconstructive hand surgery and physical therapy.

Detective McCarley willingly took grave risk to his own life in order to aid his fallen comrade. His ability to remain cool headed and to form a tactical plan that quickly ended the gunman's actions ensured the safety of both his fellow officers and the apartment building's residents. His heroic actions under stressful and confusing circumstances is a credit to himself, his department, and the community he serves and are in keeping with the highest traditions of law enforcement. As such, it is with great honor and pride that the National Rifle Association names Detective David McCarley, of the City of Pearl Mississippi Police Department, as the 2012 NRA Law Enforcement Officer of the Year.