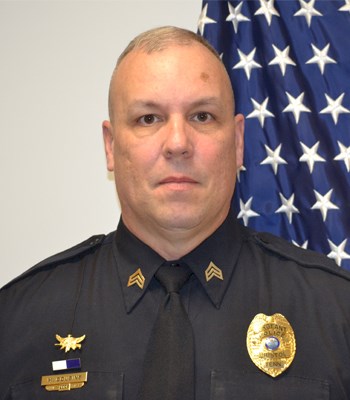 During the early morning hours of July 7, 2016, officers of the Bristol, Tennessee Police Department were dispatched to a local Days Inn motel to a report of shots fired.

Upon arrival of the officers, shortly after 2:00 AM, Sergeant Mathew Cousins, the second of three officers to arrive, discovered spent .223 shell casings on the ground. Realizing that the situation was very serious and the suspect was apparently armed with a rifle, Sergeant Cousins returned to his vehicle to obtain his patrol rifle while at the same time alerting other officers of the situation.

At this point, Sergeant Cousins observed the shooter emerging from behind a nearby auto parts store apparently to ambush the officers from behind. The suspect was armed with a rifle and a handgun.

Sergeant Cousins immediately challenged the suspect and ordered him to drop the weapon. The suspect ignored the commands and opened fire on the officers.

All three officers returned fire striking the suspect causing him to fall to the ground. Even though he had been wounded by the police gunfire and is on the ground, the suspect continued to try and fire his rifle at the officers.

Sergeant Cousins advanced on the downed suspect during an intense gun fight and the suspect was taken into custody.

Only when the gunfight had ended was it determined that Sergeant Cousins had suffered a minor gunshot wound to his leg.

The clerk at the Days Inn had suffered multiple gunshot wounds and was immediately transported to the hospital.

The suspect survived and it was later learned that he had fired several rounds into passing cars on an adjacent four-lane roadway, killing a local paper carrier, Jennifer Rooney.

The suspect also admitted to “being in a rage” and that his attack was racially motivated.

Thanks to Sergeant Cousins’ quick observation of the spent rifle casings and realization that the suspect was armed with a rifle, as well as, his quick response to obtain his patrol rifle and the fact that he spotted the suspect moving in from behind the officers to ambush them, he prevented further injuries or deaths.

Additionally, Sergeant Cousins’ decision to advance on the downed shooter, who was still firing at the officers, turned the tides on the gunfight, which resulted in the quick resolution to the matter.

As such, it is with great honor and pride the National Rifle Association names Sergeant Mathew Cousins as the 2017 NRA Law Enforcement Officer of the Year.